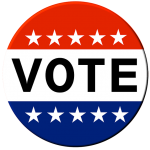 Not planning to vote this year? Every election millions of people pass up the chance to influence the direction of their local, state and federal government.  Why don’t you vote? What’s your excuse?

We get it. Between work and family, sometimes there’s not much time for anything else.  But most states now offer either early voting or vote-by-mail options! Early voting lets you pick a time, in a date range prior to election day that’s convenient to you. You may even be able to choose your polling place – for example, vote early at a polling place closer to work or en route from dropping off your kids.

Voting by mail is just that- apply for a mail-in-ballot, they send it to you, you fill it out and mail it back.  Learn about the voting options in your state.

Whether you like the leading candidates or not, the fact of the matter is that one of them is going to win.

Even if you don’t like them, they represent a party with a platform on various issues, such as taxes, schools, health, environment, jobs, infrastructure, etc, and will generally act along those lines if elected.  Which party’s goals and values are a better match for you? In the long run, its better to choose the candidate more in tune with the things you value!

While a gubenatorial or presidental race usually “headlines” an election, there are always a lot of smaller contests on the ballot, such as state representative, county clerk, local councilmen, sheriff, and town clerk. These people make decisions that directly affect your quality of life by affecting the laws of your town, county  or state and determining where your tax dollars are spent. Even if you don’t like any of the “major” candidates, find out where the local candidates stand on issues that are important to you and vote accordingly.

Often a ballot includes yes/no vote questions on local municipal issues – things like zoning or how your town spends its money. This is one case where the voters, not the politicians, are the ones who determine the outcome. It’s your opportunity to vote for the things you want and against anything you think is a bad idea.

Much as we like to think not voting makes a statement to the politicians, it doesn’t. It just gives away your opportunity to have a voice in the process.

Learn more about the issues and candidates on your state / local election board web sites and the candidates’ own web sites.

If I register and vote, I’ll get called up for Jury Duty

This still holds true for Louisiana and Ohio, but for other states it’s a misconception based on outdated information.

For years,  jury pools were selected from voter registration data. However as more computerized information became available, states took advantage of new data sources. Today, very few states (there were 4 back in 2012, now it looks like only 2) still rely solely on voter registration rolls to select people for jury duty.   The rest use a merged list which includes sources like driver’s licenses, state ID,unemployment lists, tax rolls, utility information and even telephone directories!

If you do get called up for jury duty in Louisiana or Ohio, at least they compensate jurors fairly well – $50/day in LA, $40/day in OH. Unlike New Jersey, which still pays jurors a miserable pittance of just $5/day.

Don’t believe the process works? Elections have been decided by as little as one vote! And in most elections, if all the eligible people who stayed home  had gone out and voted, they’d easily have had the ability to sway the election results!

My partner is voting for the other candidate – we’ll just cancel each other out so we’re both staying home.

Fair enough … if there are only two candidates on the ballot!  But normally there are many candidates and issues being voted upon, and  many positions on a ballot will have one or more 3rd party candidates running, which puts a different spin on the numbers.

I don’t have a way to get to the polls

If you can’t get to your polling place to vote, there are alternative ways to vote and groups that can help you with transportation:

It’s not difficult to find information about the issues, the candidates and where they stand. A few tips on researching candidates: